All our favorite places to dine alfresco around Philly right now, just because we want to. Not because we have to. 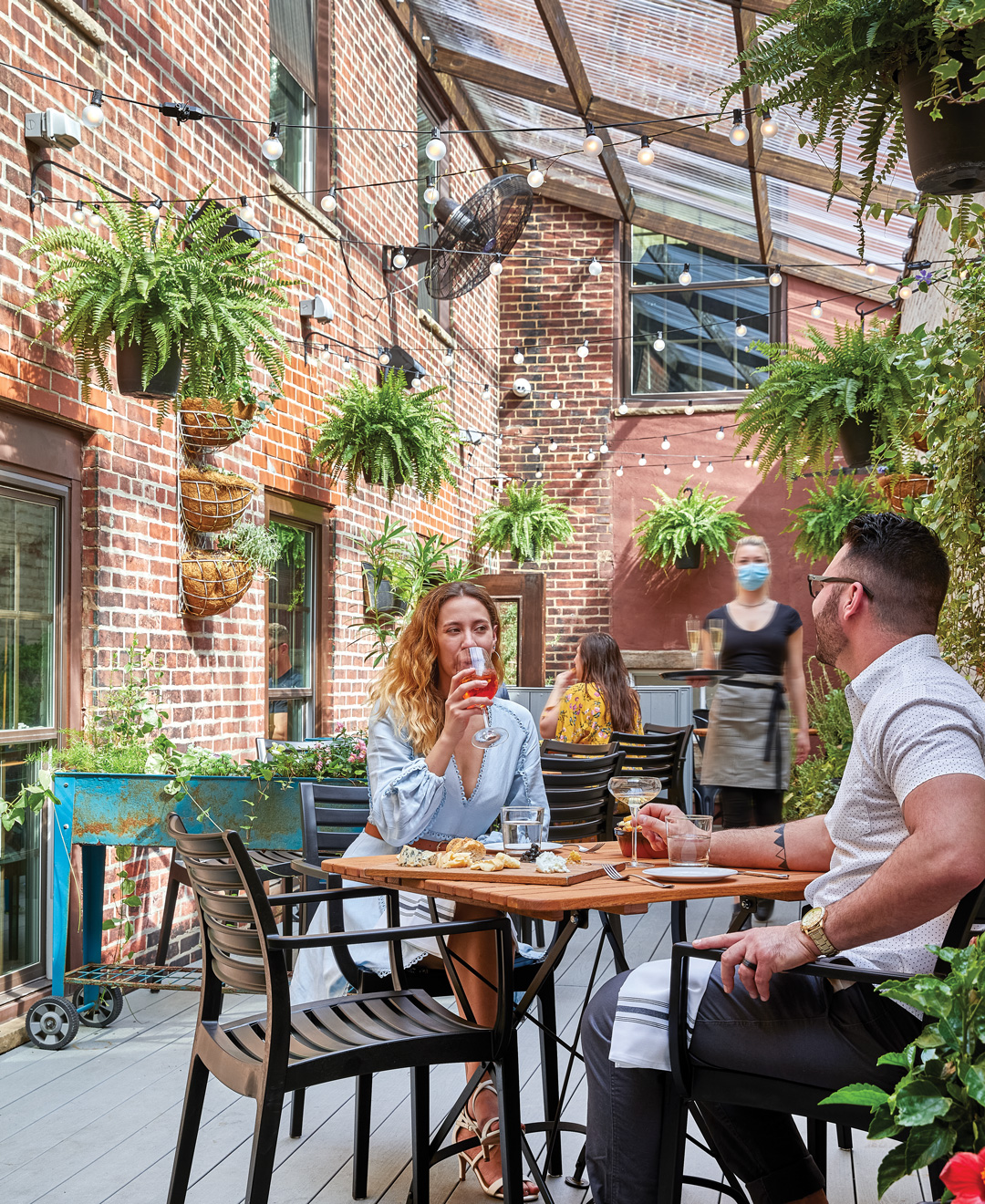 Lola’s GardenAvram Hornik, the mastermind behind almost every popular open-air restaurant in the city (Morgan’s Pier, Harper’s Garden, all the Parks on Tap pop-ups), is entering the Main Line market for the first time with his tried-and-true model: a big, open floor plan, plenty of seating, great service, a better-than-it-has-any-right-being modern American menu, and the open sky above. 49 Saint Georges Road, Ardmore.

Irwin’sThink of Irwin’s as the res­taurant comeback story of the year: Before it closed due to COVID, it was a pan-Mediterranean spot situated high above an otherwise very low South Philly skyline. Now, with chef Michael Vincent Ferreri at the helm, Irwin’s is a resurrection of Res Ipsa Café, the beloved Italian BYOB in Rittenhouse (though it’s keeping the Irwin’s name), and the return of one of the greatest balcony views in the city. 800 Mifflin Street, East Passyunk.

Alma del MarAlma del Mar’s outdoor patio is an amalgamation of all that’s great about the Italian Market in general: It’s gritty (basically just a tented concrete lot), it’s full of excellent Mexican food, and the ambience — the colorful furniture, the muraled walls, the market lights, the scrapped-together feel of it all — is so specific to itself that when you’re there, you can’t imagine it — or you — being anywhere else on earth. 1007 South 9th Street, Bella Vista.

The Deck at the MoshuluThere are very few places in this city where you can enjoy an eggs Benedict and loaded Bloody Mary brunch on the deck of an old wooden ship. Actually, there’s just a single place—this one. 401 South Columbus Boulevard, Queen Village. 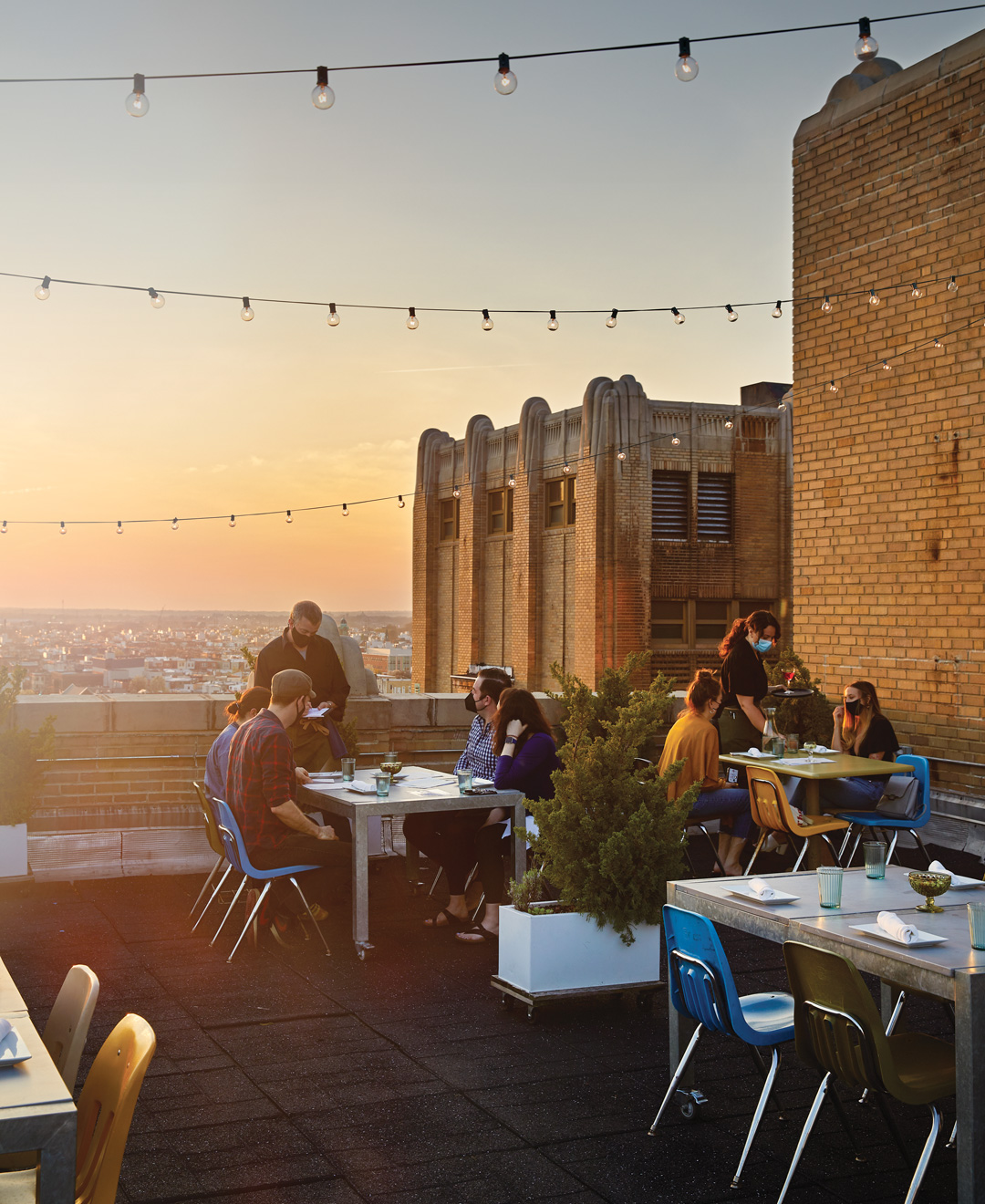 MercatoThere’s something so quintessentially Philly about the corner on which Mercato sits. With big Italian BYO vibes (meaning small; meaning simple), rotating chalkboard specials, and market lights overhead that always seem to be lit, it’s as if Mercato owns — and has always owned — its little part of the city. 1216 Spruce Street, Midtown Village.

The Landing KitchenNick Elmi partnered with restaurateur Fia Berisha to open two restaurants inside, of all places, a Residence Inn in Bala Cynwyd. The first, an all-day cafe called the Landing Kitchen, is already open, with a spacious patio overlooking the Schuylkill River. On the menu: avocado toast with yuzu kosho, a crunchy fried chicken sandwich, and a simple fontina/cheddar grilled cheese on brioche toast. The grilled cheese comes with a black caviar add-on — it is Nick Elmi cooking, after all. 617 Righters Ferry Road, Bala Cynwyd.

American Sardine BarThe little slice of sunshine next to ASB, with its patio furniture and beer in cans, perfectly captures the backyard-party feel that’s the holy grail of so many hip Philly restaurateurs. 1800 Federal Street, Point Breeze.

Le VirtùAlso called the Campo, Le Virtù’s outdoor space is one of those things that make the restaurant stand out in a city crowded to the bulwarks with charming little Italian spots. When the weather is nice, the Campo is like one long unending lawn party for its South Philly neighbors. Sometimes someone will be out there grilling, sometimes it’ll just be friends drinking on the patio, but it’s always a good time. 1927 East Passyunk Avenue, East Passyunk.

Harper’s GardenWith its open-air veranda and buzzy plaza, Harper’s Garden was our favorite place to dine outdoors (literally; it won a Best of Philly award in 2019 for outdoor dining) before dining outdoors became the rule instead of the exception. 31 South 18th Street, Rittenhouse.

Kensington QuartersSitting outside on KQ’s deck, drinking cold draft wine, spooning fluke tartare into the shell of your gnoccho frico, slurping up bucatini with clam ragout or the kimchi jjigae that came with your black bass, is a heaven only Fishtown knows. A heaven you’ll know, too, when you show up for your reservation. 1310 Frankford Avenue, Fishtown.

Little Nonna’sA sheltered secret patio for when it’s raining, fans everywhere for when it gets too hot, and spaghetti and meatballs for when the craving hits. Which it always does. 1234 Locust Street,Midtown Village.

Standard TapImagine you have a friend who has the best roof deck in the entire city. And keeps the fridge full of great beer. And also is a very talented chef. Yeah, that’s what it’s like hanging out upstairs at Standard Tap. 901 North 2nd Street, Northern Liberties.

Silk CityThis combination diner, bar and nightclub has a Seussian garden patio in the back. The colorful stucco walls and tile floors make you feel like you’ve stepped away from Philly for just a little while, and the frozen cocktails and classic diner menu will keep you buzzed and comfy. 435 Spring Garden Street, Callowhill.

GojjoYeah, Gojjo does a lot of really authentic Ethiopian food (plus chicken wings and curly fries). But the Ethiopian cheesesteak (with steak or chicken) is truly a multicultural wonder. And getting to eat it outside on the raucous back patio? That’s even better. 4540 Baltimore Avenue, University City.

Continental MidtownThere’s the giant olive (which we mean to steal someday), the haystacks of shoestring fries with Chinese mustard, the undeniable frisson of drinking a proper martini at a bar that was made for drinking martinis, and, of course, the roof deck, which is just perfect for relaxing in the sun when you really ought to be working. 1801 Chestnut Street, Rittenhouse.

Be sure to check out the new Germantown Garden! Let us know what you think!

Published as “The Return of Patio Season” in the May 2021 issue of Philadelphia magazine. - Alex Tewfik