Spring in Your Step

Philadelphia is home to miles of excellent running and biking trails, many of which pass by historic attractions, weave around rivers and wind through parks.

Active types can go on an iconic city jog that ends with a high-five from Rocky Balboa or take a scenic river-to-river route on one of the city’s prettiest streets. Just choose the distance and scenery, and get moving!

Of course, exploring Greater Philadelphia is a bit different in 2021. Masks are required in all public spaces, as is social distancing. Your best bet: Plan ahead. Look online to get a better sense of what experience to expect. Read more here about COVID-19 and Greater Philadelphia.

Read on for some of the best running and biking trails in Philadelphia and the Countryside. 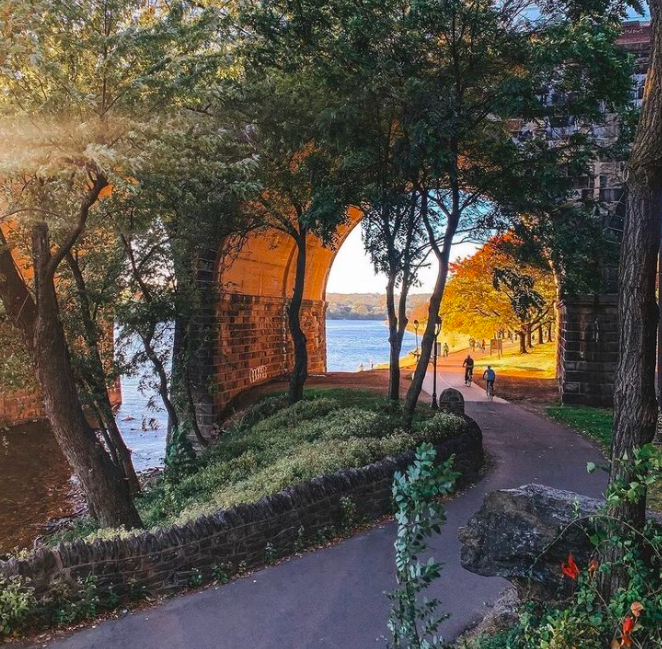 One of Philly’s most popular running and biking routes, the Kelly Drive and Martin Luther King Jr. Drive Loop is a nine-mile lap that hugs both sides of the Schuylkill River. The paved path — part of the larger Schuylkill River Trail — begins near the Philadelphia Museum of Art and winds its way along Boathouse Row to the Falls Bridge in East Falls. Riders or runners cross over the bridge to the opposite side of the river and head back toward the city to finish the second half of the loop on Martin Luther King Jr. Drive. (Bonus: As of March 2021, MLK Drive is closed completely to vehicular traffic, so bikers and runners can use the road!)

While not technically a trail, Spruce Street extends from the Schuylkill River to the Delaware River and is certainly one of Philly’s most beautiful roads. Start at 25th and Spruce streets and pass through scenic neighborhoods like Society Hill, Washington Square West and Rittenhouse Square on the way to Spruce Street Harbor Park — the perfect location to cool down when it’s open during the warmer months! — at the other end. If traveling by bike, take advantage of the designated bike lane that runs from east to west, starting at Christopher Columbus Boulevard and ending at 25th Street.

The beautiful, iconic Benjamin Franklin Bridge spans just one and a half miles across the Delaware River, connecting Philadelphia to New Jersey. Start at Fifth and Race streets and take the pedestrian walkway across the bridge and back for a three-mile workout, complete with an impressive look at the skyline. Once back in Philadelphia, stretch out post-activity at the nearby Race Street Pier, which offers some amazing views of the river and the bridge.

In his celebrated run, Rocky Balboa conquered a 30-mile venture across the city — nearly the equivalent of a 50K! For a run that’s slightly more manageable, follow this three-mile route that starts at Ninth Street and Washington Avenue — the heart of the Italian Market where Rocky ran to the sounds of cheering fans — and ends just like Rocky’s run: with a sprint up the steps of the Philadelphia Museum of Art. Bonus: Run back down the steps to give Rocky Balboa a high five. (Find his statue to the right of the base of the steps.)

The Centennial 5K Route is a paved path that weaves its way through grassy parkland in Fairmount Park, perfect for joggers looking for a 5K loop or families seeking a well-marked path to cruise along on a shorter bike ride. The trail begins behind the Please Touch Museum, then passes by the Shofuso Japanese House and Garden before looping around the Centennial District, where the 1876 Centennial Exposition was held to celebrate the 100th anniversary of the founding of the United States.

Named for the boxers – including Muhammad Ali and Joe Frazier – who’ve used it as their training grounds, the Boxers’ Trail winds its way around East Fairmount Park, connecting spots like the historic Smith Memorial Playground and Playhouse and the area’s historic mansions to the Strawberry Mansion neighborhood. In fall 2020, the Fairmount Park Conservancy revitalized a gateway to the trail at Dauphin and Greenland drives, while the southern end starts at Sedgley Woods Disc Golf Course at 33rd and Oxford streets. The trail is also accessible via the Kelly Drive Loop at the intersection of Kelly Drive and Fountain Green streets. 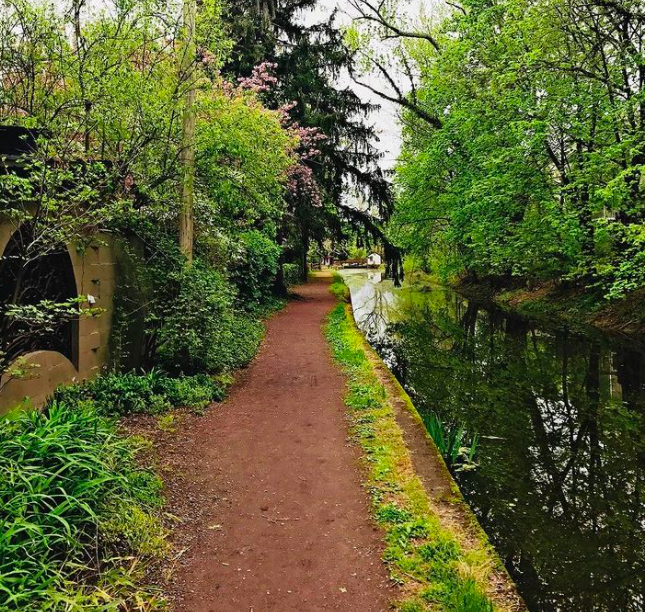 A 60-mile linear park along the Delaware River from Easton to Bristol, Delaware Canal State Park and Towpath are perfect for joggers, cyclists and nature enthusiasts who enjoy the wildlife that thrives on the many miles of river shoreline and 11 river islands. The journey takes trail users through historic towns, past farms and by the Lock Tender’s House Visitor Center in New Hope.

More commonly known as Forbidden Drive (named because cars were banned from traveling on it in the 1920s), the fairly flat Wissahickon Valley Park trail follows the Wissahickon Creek for 5.5 miles, from Lincoln Drive to Germantown Avenue. For more mileage, hop on the Schuylkill River Trail at Falls Bridge and take it to Ridge Avenue, where a paved bike path continues into the park to a parking lot that leads into Forbidden Drive. If driving is an option, navigate to the Valley Green Inn, located centrally within the park, where a large parking lot sits adjacent to the trail. Note that bike bridges in the Wissahickon are temporarily closed for restoration as of March 1, 2021. Check out the City of Philadelphia’s map and detour guide for details.